Walk around, seeing things that matter...

Rather than reading all the gloomy reports about global destruction from a nuclear confrontation between Russian idiots and American sillybillies I went walking in nature and discovered hidden in a small tuft of grass a nest of robins. Yes, life goes on. I nearly asked the robin nestlings what they thought of Putin but whilst they blinked with their eyes I didn’t think they had an opinion. That is strange as the Russians might well unleash nuclear armageddon which also would impact the robins. I just marvelled at how small they were. But you know, they have as much right to live as you and me! On my daughter’s property the germander speedwell grows profusely and I even noticed a harebell! Loads of buttercups at this time of the year and what surprised me there is a pair of grey wagtails that keep trying to get into the house! They tap their beaks onto the window, ‘Let us in’! I think the explanation was that prior to people living in the cottage at the time of extending the property it was open to the air at breeding time. They were probably nesting inside the building somewhere. But even more interesting red kites are now regularly seen hunting rabbits. Not so long ago these were extinct in Wales or nearly so. There was a farmer in Mid-Wales who started feeding these birds and now some are regularly seen as far south as Cardiff!. A real success story. Our whole family is very much attuned to nature and are pretty observant, especially about birds. Too many are now endangered thanks to unbridled house building and environmental destruction. What bothers me is the enormous decrease in house martins and swifts. In years gone by you would see hundreds flying over the small Welsh towns but now you will be lucky to see tens, perhaps twenty or so. My daughter has a barn which is open, one of the windows has lost the glass and last year two pair of swifts made a nest. These are still in situ and I hope that they will return as long as the Sicilian hunters have not shot them. Just hope and wait until the south wind blows again. 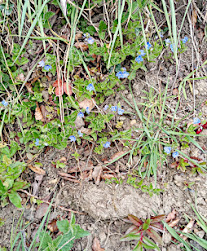 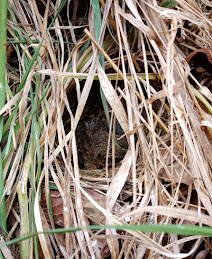 Veronica chamaedrys, the germander speedwell, bird's-eye speedwell, or cat's eyes, is a herbaceous perennial species of flowering plant in the plantain family Plantaginaceae. Considered a good luck charm for travellers, the bright blue flowers of Germander speedwell are meant to 'speed' you on your way. This reputation may well have come about because of its habit of forming large clumps in hedgerows, roadside verges and grassy lanes; it can also be found on grasslands and in open woodlands. The flowers appear from April to June (from The Wildlife Trust).

The robin's nest is not too clear I did not want to disturb them too much.