Statistics and nothing but statistics...

And so we are going back to normal. Whatever normal is. Apparently humanity cannot wait to get sloshed as fast as possible. Be it visiting a pub in England (Wales is still dry) or taking a flight to the shagging beaches of Spain. It’s all the same I suppose except the sun burns a happy 40 degrees Celsius in Spain whilst in Blighty we swelter with 10 degrees and a storm or two. Copious rain to boot. Happy days!

There is a story to tell here and for those listening they can see and hear the thunder and lightning on the horizon. You might have thought the various governments would have taken the opportunity to have a serious look at how society has to be if we are serious about curtailing humanity’s gaseous outpourings. I am not talking about bodily emanations, no indeed! We are talking billions of tons of carbon dioxide, methane and nitrous oxides amongst others. Talking about bodily emanations we should not forget those made by our cattle! There are now nearly 8 billion human on this mudball!  Graph from Wikipedia. (https://en.wikipedia.org/wiki/World_population) 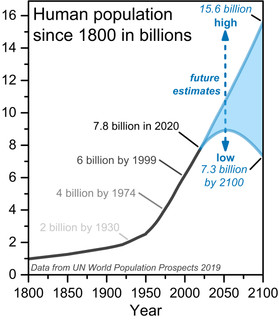 You should ask this – can we actually support so many humans? We tend to not think about that in the western world as we in the main eat more than we should and have a home to go to. That is not true in a lot of other places. India or rather Asia has plenty of problems, the favelas in Brazil are another show of poverty and deprivation. Even here in the UK we have to struggle with deprivation, homelessness and poverty! I suppose it is not much different in other European countries , the US being the so-called richest nation on Earth has plenty to worry about as well.

Looking at the graph you will note that all these pressures are not that old. The graph really takes off at around the end of WW2. The type of graph worries me, I studied some elementary Statistics and in that you learn about Normal Distribution.

And the graph shows the beginning. These graphs go to the top and then tall off in the shape of a bell.

This means there will be a point at which the population number can no longer be supported and will start to decline. This decline might be rapid through starvation and diseases. Bearing in mind that the upward curve will bottom out probably before 2100 by 2150 there will be only a remnant left. Rest assured this process is natural, it cannot be stopped unless you change the reasons why the curve is going upward. That simply means adjusting lifestyles to levels that will not change the composition of the atmosphere, proper land-use and prohibiting the petrol/diesel combustion engine, including aviation engines. It is a sobering thought but there is still time and things like gas pollution can be improved quickly as this coronavirus period has shown through less car driving and virtually no aircraft flying. There it is, the choice is ours. It literally is let live or let die.